We just finished day 32!!  I can't believe that we are that far along.  I love being ahead of the game.  It makes things like ... sick days ....  hockey tournaments ... possible.  We are very ahead of the public school and have lots of opportunites for flexibility.

Since we are 32 days along, I thought it would be a good time to review some of the new curriculum that we are using this year.  So, here it goes.

My Fathers World - We are loving the geography this year.  Traveling to different countries and learning through crafts, games and even meals has been a blast.  I really think that the kids are learning their geography (as well as there mother).  We have made homemade pinatas for Mexico. 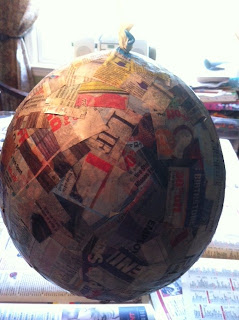 The kids loved this.  Especially when they got to hit the pinatas and candy went flying across the kitchen. Plus, they could wear the destroyed pinatas as hats. 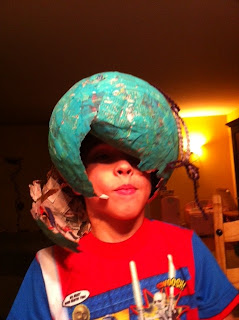 ﻿
﻿
They had a blast making homemade tortillas and we actually may do that again.  It was very easy and super cheap!  We also just got done making clay suns and we are making Inuit soap sculptures tomorrow.  Lots of fun!

I am not as excited about the Science in MFW.  I think that after using Apologia last year ... nothing else compares.  The Science is included in MFW and coincides with the Geography lessons ... but it does seem dry and a little boring.  I am still thinking about adding an Apologia Science.

Spelling Power has been great!  I love how easy it was to place the kids and spelling is super easy each day.  I mean easy in a not time consuming  for mom kinda way.  The placement of the kids worked perfectly and I do feel that it is a great way for them to learn spelling.  It is also very easy and straightforward for me ... which is an extra super bonus.

Lastly, we just started using Rosetta Stone for Latin America Spanish.  It has been great so far.  We have been doing about 15 minutes a day for the past two weeks and the kids love it.  I think part of the excitement with it is the cool headphones with microphone ... but I'm not complaining.  If it gets them excited about learning a language I am all for the cool headphones!!  I am also learning along with them.  This way they don't all learn Spanish and then have secret conversations that I don't understand.  It could happen.

What was I thinking??


So, today was one of those days.  The ones where I wonder why I brought all three of my kids home this year.  Last year was peaceful and rewarding with just me and B.  What was I thinking??

We have had a couple of these not so good days.  Not to point fingers... but they usually involve a very strong-willed, adorable (lucky for her) little 7 year old.  Last year was calm.  B and I had some tough days but they were few and usually resolved quickly.  My little ball of ... um ... energy and attitude ... is different.  There are many tough  (disruptive to the boys) days and few are resolved quickly.  I have seriously considered sending her back to public school for a few more years.  Did I pull her out too early?

Then I remember why I am doing this.  It is not supposed to be easy, right??  It will get better and we will all benefit from this time together, right??  I will miss this time when they are all grown up, right??

Thankfully, I have a very supportive husband who calms me when I have these days.  He reassures me and tells me that it will be OK and to pray.  I am so thankful for him.  I am thankful that I am able to homeschool and that I have this choice when others do not.  I am thankful for my precious (I didn't grind my teeth too hard as I typed that) little girl who is EXACTLY like I was when I was her age.

"Be joyful in hope, patient in affliction, faithful in prayer."
Romans 12:12


We are on Day 21 of our school year and things have been going pretty well.  The major issues have been time and scheduling with three students.  My two youngest love to get up early (before I am out of bed) and start while my oldest usually crawls out of bed at about 8am ... which is about an hour or more later than his siblings.

Our schedule has been flexible and we usually do our together work at 9:30.  This gives them some time to get individual work done before 9:30 and then they go back to it after we work together.  So far so good!

Today, while we were doing schoolwork, the kids noticed a large bug on the screen outside (thankfully) our window.  Of course we stopped what we were doing to catch the bug in a tupperware and investigate it with a magnifying glass. 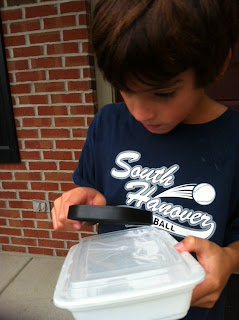 Isn't this bug scary?  It was actually pretty big too.  Over an inch long! 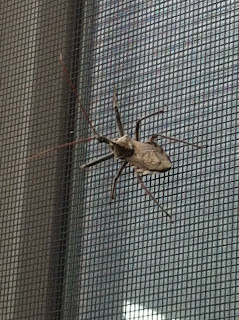 So, I was pretty happy about out impromtu science lesson ... until ... we found the bug on the internet.  Here is an excerpt of what we read ... and no I did not add any commentary to this.  It is exactly the way that it was written...


CHARACTERISTICS:  This insect is well-noted for its incredibly painful bite when disturbed or nonchalantly handled.  (Gulp)


A member of the Assassin Bug family, this insect attacks its prey (other insects) with vicious stabbing motions using the ‘fang’ at the front of its head.  This is the same fang that stabs humans who handle it or disturb it.  (What did we just do!!)


The Wheel Bug is best identified by the ridged, or spiny, wheel on its pronotum (back), which gives the insect its name.

So, we did have an interesting Science lesson today!  Maybe next time we will take the picture and look the bug up before trying to capture it.  Luckily no one was injured in the lesson!

Well, it is finally here!  The first day of year two of homeschooling.  Last year it was just B and I and we had a fantastic year.  I was (and still am) a little nervous about homeschooling all three kids ... especially my youngest who is very strong-willed.  Some say she is just like her mom.  Not sure where they get that but whatever.

It started this morning with me getting up very early (7am) with the intentions of making a big breakfast to celebrate our first day.  When I walked downstairs I saw my two youngest (the homeschool newbies) at their desks already doing their math!  They woke up early with anticipation and wanted to get started even if mom was still asleep at the late hour of 6:30am.    So, instead of making breakfast I went in and started to help with any questions they had and next thing you know sleepyhead older brother stumbled downstairs and into the schoolroom.  I think it was about 8am at that point.  I then decided to remove myself for a couple of minutes to put a quick baked oatmeal in the oven after I realized that we were out of eggs.  Poor planning on my part.  You can't make pancakes without eggs.


Needless to say, our day did not go as planned.  We stayed in pajamas for school had unbrushed messy hair and finished extra early.  I will take that! Not bad for a first day. 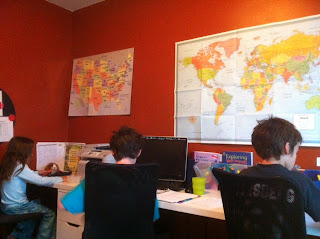 We even had a special visitor to the classroom.  E brought her three dolls to class and also brought her guineau pig, Julee. 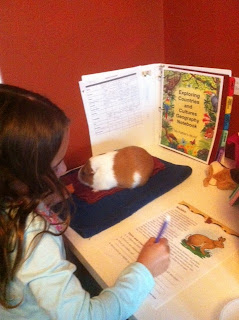 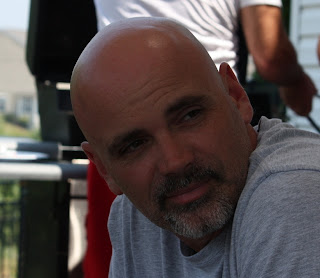 The recent book Fifty Shades of Gray and movie Magic Mike are being called "mommy porn".  What is most disturbing about this is the amount of women, even Christian women, accepting these forms of (so called) entertainment as ok.  Personally, I think that I am probably in the minority but I feel that they are  disrespectful to not only women but especially men.  At first I thought I was crazy because it seemed like no one found anything wrong with this recent trend!   I have absolutely no desire to see the movie or read the book.  I know what a real man is.  He can't be found in either of these.  Thankfully, God has blessed me with a real man.  My husband is a real man.  A Godly man.  And I am so thankful for Godly men!

Here is what a REAL man is:
I could go on and on .... My husband is a real man.  More of a man than any character in Magic Mike or Fifty Shades of Gray.  And check out that picture.  He is pretty darn handsome to boot!  I am a very blessed woman and I know it! :-)

Another benefit of homeschool - Confidence

We are officially done with year 1!!  :-)   In PA we have a lot of hoops to jump through in order to homeschool.  Today, I had my affidavit notarized and handed all required documents plus my portfolio into the district office.  It felt so good!  I have to say that I am little sad that the first year is over, but I am really looking forward to next year. 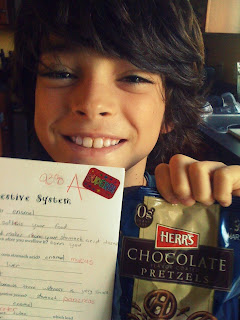 This year has been such a blessing for me and B.  We have grown closer and he has become such a happier kid.  I feel like he has grown up a lot and matured more than I would have ever expected.  People always talk about kids socialization and how homeschooling is detrimental.  B is living proof that homeschooling can be such an incredible gift.  Throughout the year, I have seen him talk more comfortably with adults, do his work responsibly and without a whine (well - maybe some days a little whine - but it was rare), and confidently jump into new environments.  As a shy kid, I am so proud to see him grow in confidence and come out of his shell.  When we started this adventure, I never imagined all the benefits that I would see.  I was focused more on what good things would happen academically. His growth in confidence, not only in school but in life, has truly amazed me!

My youngest two are finishing up their public school years this week.  I have most of my curriculum and I am looking forward to getting ready for next year.  I hope to start in early August so that we can take some breaks year round.  This summer I am having them do some reading and a little bit of math to keep their minds working until we get started.

Although I am nervous about having 3 kids at home instead of 1, I try to remind myself that that is how I felt at this time last year.  Although, I do have more confidence than I did last year.  I guess we both have improved in that way! ;-)

Here are two of our dogs sleeping in the schoolroom.  This is a bean bag chair that I bought to use as a reading spot.  Needless to say the dogs quickly turned it into their new dog bed.  By the way, Ladybird is fast asleep in this picture and actually snoring ... loudly ... in that position! 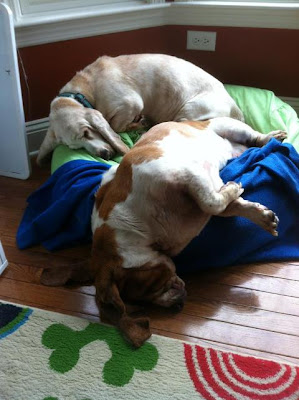 S
I am a child of God, wife of an amazingly awesome husband, and mom to three very cool kids. I guess you could call me a hockey mom since all my kids play hockey ... And I am starting my second year as a homeschool mom. 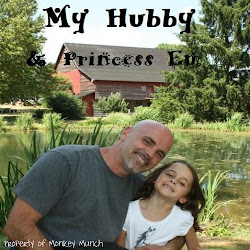 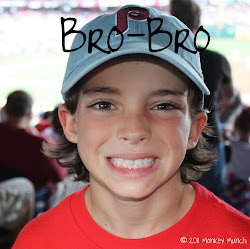 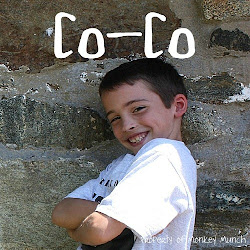 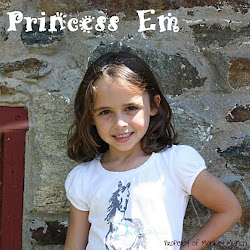